For this challenge I made several attempts. Here is a photo of my first six tries- 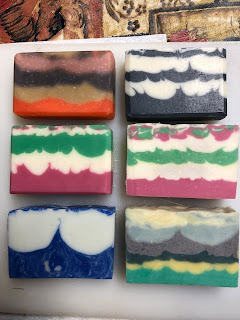 Some were successful and some not so successful. I had several that i considered entering and it was hard to decide which one I wanted to enter. I learned a lot about mixing and emulsion vs. trace and how to use the layer being poured to shape the layer below it.  This is my first time doing this challenge and it has been fun.

When I first saw the challenge, it reminded me of ocean waves and I thought of making an ocean scene but then I also thought it might make a nice grassy meadow scene too. In my first attempt, I wanted to try out some colors I might use in a meadow scene and also see if I could make points. Here is the ugly soap I made for my first try. 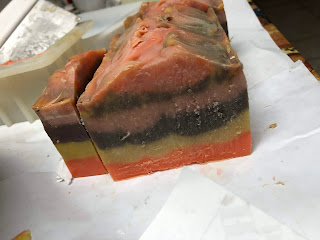 My soap batter was too thick and my colors were hideous. I did not make any points in my layers.  I learned that I should not over mix my batter.

For my second attempt I decided to keep it simple and work on just making points. I choose charcoal and TiO2 for my colors. I used only 4 oils, coconut, palm, olive and castor oils to keep it simple. I scented it with tea tree and spearmint.  I like the results but I felt like I was thrashing around and only got nice results by accident. Here are some pictures- 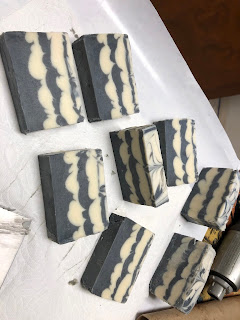 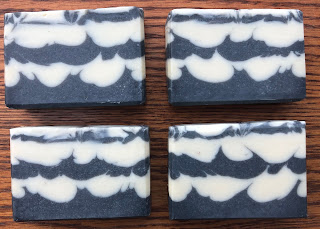 For my third try, I wanted to have a better sense of how I was making the points. I used the same recipe as before and made layers of pink, green and white, scented with lemon eucalyptus and lavender. This time I was calmer and better able to see where I was making points. I also learned you could split the points by pouring the batter down the center of a stripe. The result reminded me of a snail's head. I liked how the soap came out but I don't really think it was much of an improvement from the previous soap I made. Here are some pictures- 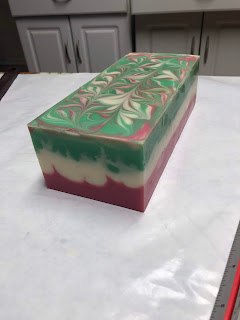 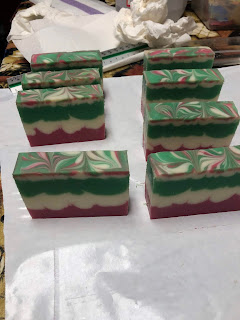 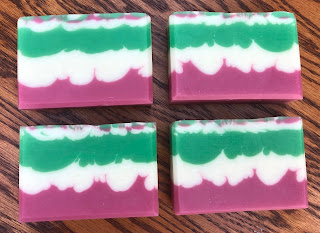 In my fourth attempt but I wanted to try it with squeeze bottles and I also wanted a mint smell to go with the colors I chose. This time I chose to use the recipe that went with the tutorial and it didn't work well for me. I think I either under mixed it or made a measurement error somewhere because it came out somewhat crumbly. I also decided I did not like the squeeze bottles as much as the funnel pitchers. I decided that it is best not to change too many variables at one time. 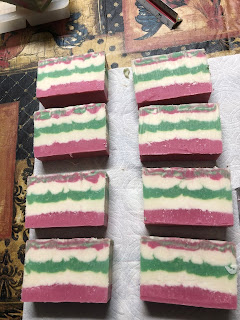 For my fifth attempt I decided to go with two colors and try to make a single point in the center as tall as I could. I wanted to learn how to control the points. I choose the make a dark layer with some blues and a silverish swirl. The light layer was TiO2 with just a hint of blue mixed in. I poured on one side then on the other side going back and forth pushing the blue batter up with the white batter. Here are the results- 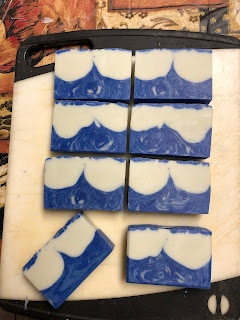 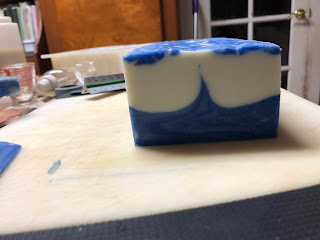 In my 6th attempt, I wasn't really attempting to make a finished product, I was just trying out some new colors I had just received. I still wanted to make a meadow scene so I chose colors for grasses flowers, trees, mountains and sky. Since I figured this soap was just for me, I wanted it to be nice so I added a little meadow foam seed oil and I scented it with lemon grass, litsea and ylang ylang.  It accidentally came out much nicer than I expected. I was able to get some small points in the first layer which would be like grass but then my batter got a little bit of ricing and too thick. My points in the next two layers are minimal but looking at it now, I am not sure I would want those layers to be pointy. I was able make a point for my mountain like I had done in my previous batch even though the batter was getting thicker. I found that with thicker batter, it still works but you have to wait a little bit for the lower layer to rise up. I also had to tap the mold down a few times to help it even out. The result is actually fairly close to what I had originally wanted to try to make. Here are some pictures. 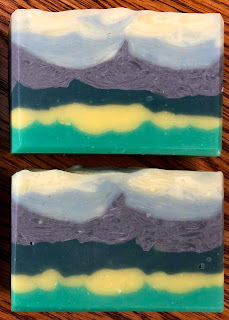 Well I had to try one more batch. In high school many years ago I had an art teacher that told us that to become a good painter you would need to go through at least 100 canvases. Sadly that was the last art class I ever took. I would guess to really master this technique, I would need to make a few more batches, maybe even 100. That isn't likely to happen this month.

In this batch, I split the oils and lye and did the bottom two layers first. I wanted the yellow layer smooth on top. This way the batter was still fluid for the top layers too since I mixed them up a little later.  I like this batch but see lots of room for improvement but since this is closest to what I originally envisioned, I will submit it. Here are some pictures- 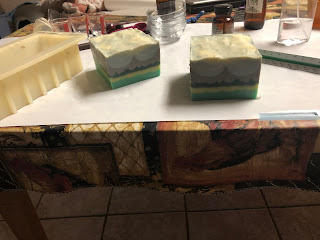 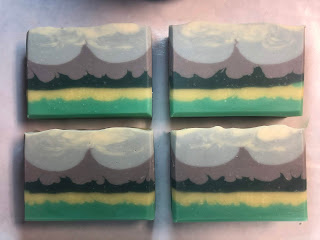 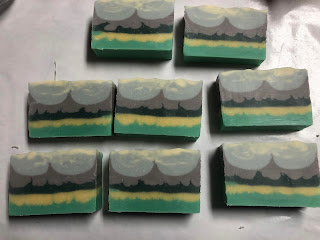