This month's challenge was to make a soap using the pipe divider swirl technique.  I actually tried this technique a couple of years ago after watching a YouTube video on it but I didn't really know what I was doing at the time. It came so-so. I almost didn't get this one done and I am finishing this up with less than 12 hours to go. I am a teacher and school is back in session so I have much less time. One thing I have learned is that for me it is not a good idea to make soap on a school night or when I am sleepy because I might do something silly like accidentally leave out one of my oils or mix up my lye numbers. During this challenge I produced a lot of rebatch material.

I wanted to use natural colors because I had bought a selection clays and plant powders last June and I was just itching to try them out. I had an alkanet infusion that I had going in a jar for a couple of years now. I have only used it a few times but basically I just dumped a couple of tablespoons of alkanet powder into a mason jar, filled it with olive oil and let it sit. After I used some, I just refilled it and added a little more alkanet. Other infusions I made by putting about 1-2 tbs. powder into teabags and placing them into mason jars filled with olive oil and putting them in a hot water bath in my crock pot for a couple hours. I learned this from a Soap Queen Tutorial I think. I made these infusions back in June and they had been sitting on my shelf waiting to be used. I had infusions of annatto, matcha tea, spirilina, paprika and I also tried to make an infusion with indigo but I found that indigo works better if you just use the powder mixed in oil as it doesn't infuse. 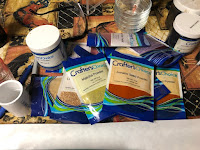 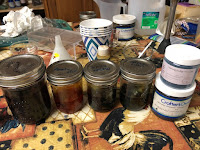 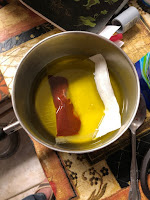 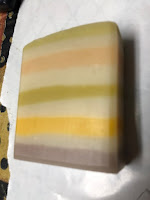 For fun, I made a layered batch of soap with each of the colors I made separated by plain soap. The bottom layer is alkanet, then annatto, the middle green layer is spirilina, then paprika and the top layer is matcha. Each layer is colored with about 15% of the oils replaced with the infusion. (All of my percents are "about" because I use a food scale that measures in 8ths of an ounce so I always adjust my amounts so that they match my scale.) I used this bar as my baseline from which to go lighter or darker. I chose not to use the paprika. In one of my throw away practices I experimented with replacing all of the olive oil with the infused oil. I liked the purple I got with the alkanet but the annatto looked like someone cracked an egg in my soap.

After playing around with the colors, I needed to make some more infusions but I was too impatient to take a even a couple of hours so I just dumped some of the powders in tea bags, put them in pans, added oil and stuck it on the stove top. Of course I wasn't paying attention and I kind of over cooked them and they smelled a little funny but they worked out ok. The new annatto was really strong and in my final soap I reduced the usage to about 8% of my oils and I still diluted the orange soap with some uncolored soap to tone it down.

The colors I chose for my soap were dark purple (33% alkanet infused oil), light purple (12 % alkanet infused oil), light green (16% matcha infused oil), Dark green (33 % spirilina infused oil with about a 1/4 tsp of indigo powder added to 2 ounces infused oil), orange (annatto) and uncolored soap. I scented my soap with a mixture of pepermint and eucalyptus.
The mold I chose has a lot of sentimental value to me. It is actually a box my father made many years ago for one of his telescope mirrors. He was an amature astronomer and he ground his own telescope mirrors and then he would pack them up and send them somewhere to have the silver part put on. The box makes a great soap mold. I wonder what he would have thought about its current use. 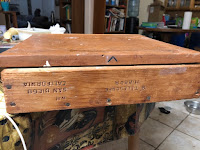 The recipe I used was just a basic palm, coconut, olive and castor recipe. I ran low olive oil by the time I got to my final attempt so I took what I had left in the bottle and added enough avocado oil so that my olive avocado blend was 75% olive and 25% avocado. There was quite a lot of arithmatic in planning this soap. I never used the soap calc I keep hearing about, I only learned about it recently. I have always done my calculations by hand. My soap was oven processed. 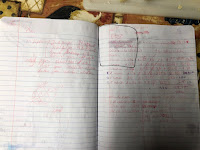 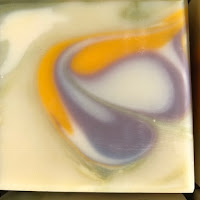 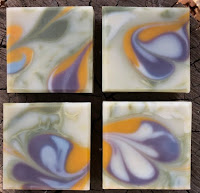 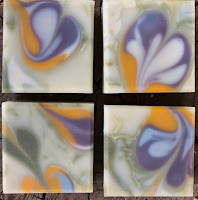 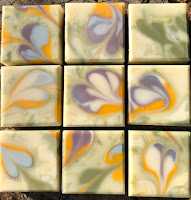 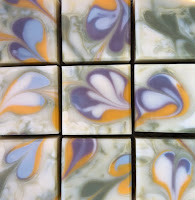 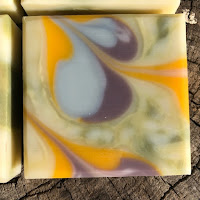 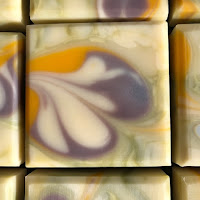 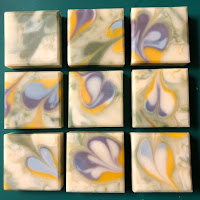 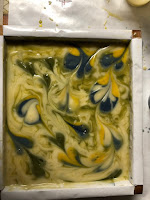