Slanted layers - This month's challenge was to create a slanted layer soap, rotating the mold at least once during the process. I did not attempt the chevron challenge but it does look like it would be fun.

The hardest part is choosing the right fragrance that would accelerate the soap at just the right speed. The soap needs to be fluid when poured but it also needs to set up quickly so the next layer can be poured. Time to break out the florals! During this challenge I made soap using Brambleberry's English Rose, WSP Magnolia blended with 15x orange essential oil (mmmm... love this blend!) and Brambleberry's Baby Rose. I also colored all of my layers with clays and activated charcoal. For the green, I also added a little spirulina powder.

Another hard part of this challenge was the time constraints I had to work with. To have a nice flat layer, I needed not to overmix but this also meant waiting longer for it to set. I had to make sure my remaining batter stayed fluid so I had to keep them stirred. This was doable but it took a long time and I got tired or I needed to go somewhere so I rushed things at the end and got a bit sloppy. But overall I had fun with this challenge and I made a lot of nice soap. I am afraid I am going to be like the neighbor that grows too much zucchini or I am going to have to become a compulsive hand washer to use up all this soap.

Here are some pics of some of the soap I made. 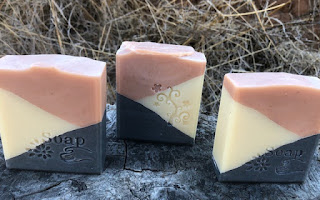 This was my first attempt. It is scented with Brambleberry's English Rose. There is a silver mica line between layers that doesn't show up well.

This one is a tribute to my love of geology. I call it "Angular Unconformity". The charcoal lines are really bad but I got some interesting textures in the different layers. This one is scented with magnolia/orange eo blend which smells heavenly but totally does not match the design. 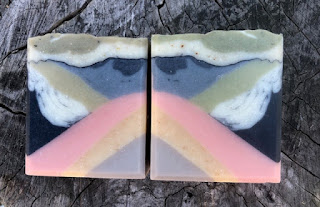 I was in a hurry for this one. I was running out of some oils and using up some older oils I had on hand. It has some nice ingredients and the scraps I have tried so far... well this is the one that will make me a compulsive hand washer for sure. I was testing out colors and textures. I really like it even though the layers are not straight. I think it looks like a volcano.

Here are some pictures of the process I used. I mixed my lye into my oils at about 90 degrees. I barely mixed to emulsion and then split the batter into 3 large funnel pitchers.  I took one large funnel pitcher and split it into three smaller pitchers and the one by one did the layers at one angle adding the clays and the fragance and mixing with a mini mixer before pouring. Then when the parallel layers were set enough, I split up the next funnel pitcher and rotated the mold and repeated the process. The fragrance I used was Baby Rose from Bramble Berry. It worked well but I think I like the English Rose fragrance a little better.


Other pictures of my entry: 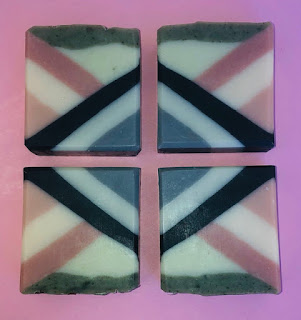 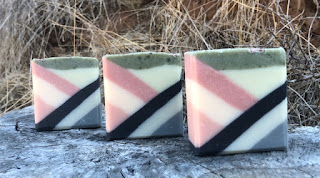 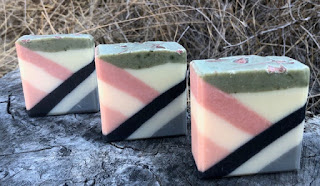 Photography is something I need to work on. I only have my phone to use and the lighting in my house is pretty bad. I have to search my yard for a place with good lighting that is not too bright and is neutral. Here is the place I found today where the bright sun hadn't reached  yet.

If I had to redo my soap, I would make some changes to the colors. The pinks were supposed to be three different shades of pink but I don't think they came out that way. I would leave the lightest pink as white and darken the darkest pink for better contrast. I am still not certain I like the green (my daughter likes it) I might have liked the top layer to be black or a dark gray instead. The top layer was rushed because I had to get to our Arts and Crafts Project 4-H meeting and needed to get the soap done. I am happy to say, I made it to the meeting on time... barely.