This month's challenge was to make a soap that was mostly black and white with a single accent color. I chose to use this opportunity to practice and learn techniques that were new to me.  I have been subscribing to the tutorials since June or July but I haven't really had time to try as many as I would like. I worked on three of them this month, the pull through technique, the circling Tawain swirl and the Mantra Marbles technique.

The first technique I tried was the pull through method. After the first attempt it was clear that while it makes really fun soap designs, it was probably not the best technique for getting clear black and white. That didn't stop me from making a few more batches. All three batches shown are made with black, white and a single color. The first was a green mica with tea tree and spearmint, the second was annato with orange and patchouli and the third was alkanet with lavender. 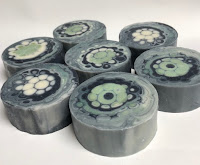 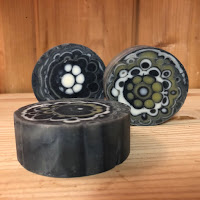 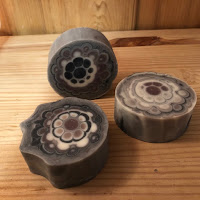 Another technique I worked on was the circling Taiwan swirl. I made two batches, the first batch was made with charcoal, kaolin clay and indigo. It was scented with eucalyptus and peppermint. I really liked the result but the colors were not distinct enough to show up well and the indigo was too gray. The second attempt I used green sea clay and spirulina instead of indigo. I over mixed it so it wasn't very fluid. The results remind me of dead underwater plants but I like it anyway. 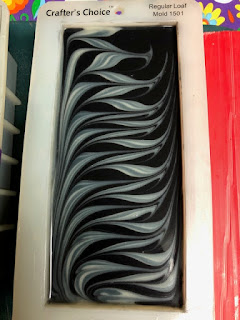 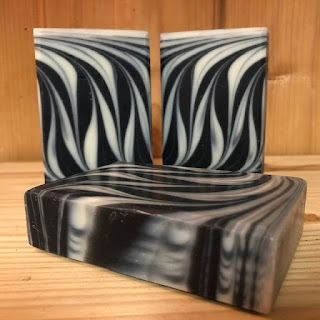 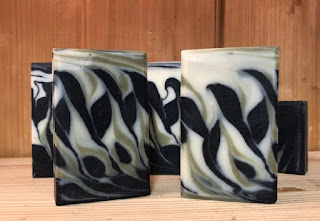 The other technique I worked on was a variation of the mantra marble swirl. I figured I could use a loaf mold instead of a slab and cut it horizontally and make smaller batches this way. Here are my first two tries. The pink one had too many air bubbles in the black and the black in the blue one wasn't consistant in color and texture. I was surprised how a small amount of color, aproximately 1/6 of the overall soap looked like so much more! 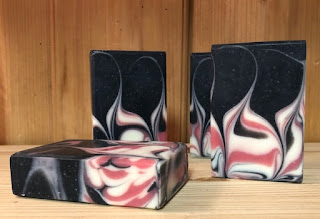 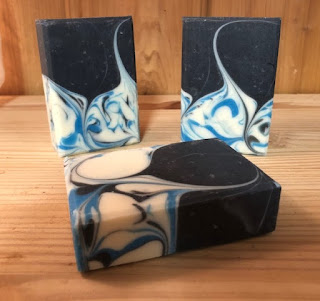 For my next soaps, I played around with how I added the soap to the marbled side and I switched from black to white for my solid side. I added the soap on the marbled side using paper cups and a wall pour instead of squeeze bottles. I combed my soap one stroke at a time rather that making a combing tool like in the tutorial and I also changed my swirl from a figure 8 to circles. My inspriation for this came from watching Youtube videos by Etsuko Watanabe. So the result is a highly modified mantra marble soap. I have a solid side and a mixed side and I have swirls between them.   I hope I didn't use too many techniques since it is hard to tell what constitutes a new technique and what is part of a multipart technique.
Here is the soap I am entering. The black is from charcoal, the white is titanium dioxide and French White Shimmer Mica and the blue is Peacock mica from Mad Mica. The fragrance is Sea Salt & Driftwood from WSP which behaved extremely well. I have a small amount of stray black in the white from black leaking under my divider I think. I would like to try again and make sure I pour some white on both sides of the divider before pouring in any black to see if this results in less black leakage. 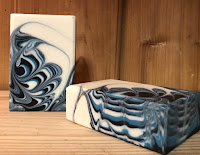 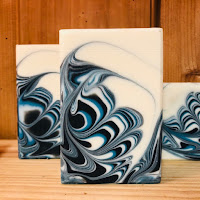 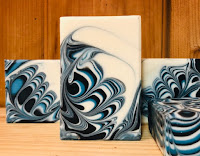 All together I made 9 different soaps using black, white and an accent color and I like them all. The best part of this challenge was being able to try some of the techniques that I used to think were so impossible!