This was one of those very busy months so I made just one design and I had to keep reminding myself to keep it simple! I am entering the regular category with 4 or fewer elements.

My design consists of a meadow, hills, sky and a fence. I am inspired by the beauty of the southern California back country in the spring. In each layer I attempted to capture some of the colors that one might see in the rocks, the grasses, the shrubs and the wild flowers. I used in the pot and in the mold swirls in each layer and I used two soap scrapers that I made from plastic cut with scissors. The fence is carved out and filled in with soap dough I made from trimmings from the bars. The fragrance is WSP Sweet Pea.


My planning and preparation. Some sketches of ideas and my scrapers I made. I really love the Cutco scissors. They can cut anything easily: 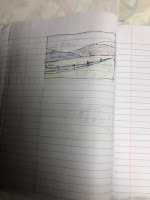 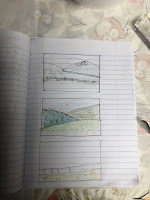 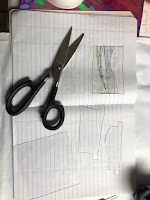 Making the soap. First divide the soap into three containers for the three layers. Next, take the first layer and further subdivide it into cups for each of the different colors. The purple is supossed to represent little patches of purple flowers that will be blooming in about a month. I put the purple in a baggie and snipped off the end. I thought this would be easier and less cleaning than using squirt bottles. I added the greens and yellows in a semi random way, occasionally adding lines of purple. I let it set al little and then scraped it. For the hills I did a similar mix of colors using mostly a pinkish color with leftover yellows and greens. I let that sit and then scraped it. Finally for the sky, I used Sky blue mica, TiO2 and Winter White mica for the clouds. After a point I stopped taking pictures after the hills were poured but before they were scraped because I was getting soap batter all over my phone. 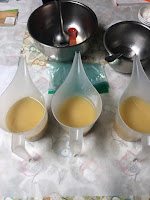 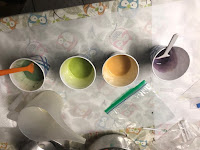 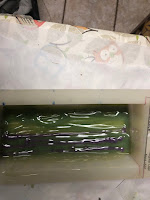 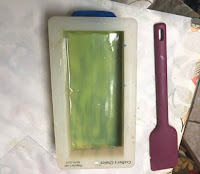 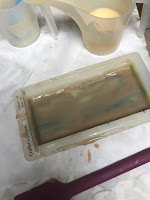 Here are some pictures of the soap first cut and then trimmed. I ordered a batch of colors this month from Nurture Soap and I think the card they sent with it was quite timely. 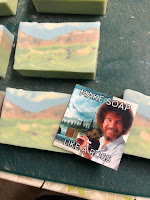 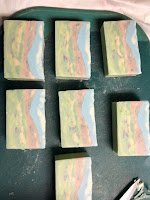 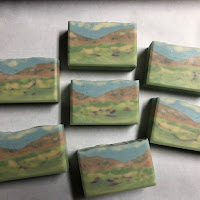 I used inlaid soap dough for the fence. I carved out into the soap where it would go. I made soap dough from the trimmings and pressed it into the soap and then scraped off the extra. I tried adding an animal in one bar. I'm not sure I can tell what it is. It could be a coyote or it could be a donkey or maybe even chupacabra. Who knows? 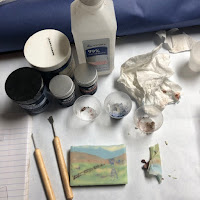 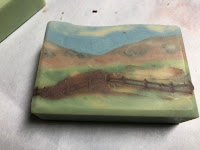 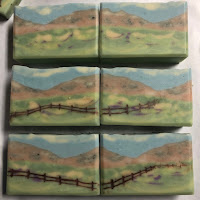 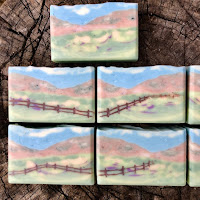 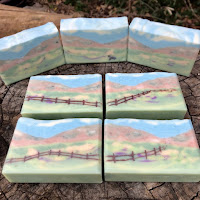 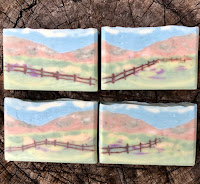 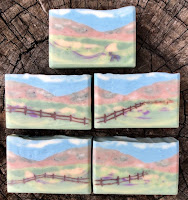 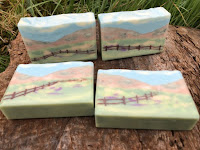 Finally, I am really looking forward to the February challenge. My husband was formally invited to be my collaborator on December 25. 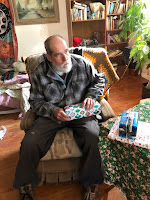 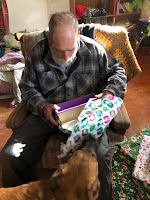 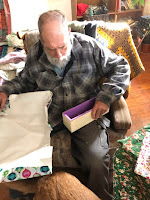