Well I feel defeated! This has been the hardest soap challenge for me since I started last July. I just can't seem to get this technique to work for me. I made  a lot of soap If the batter got too thick on me, I just reverted to a quick in the mold swirl so I at least had something I could use. Even when I thought I had the right consistancy, it still just didn't seem to work for me. On the batches where I actually got some clamshells, I used the recipe with lard. I only had lard on hand because a kid in my 4-H group gave me some he had leftover from making tamales. I am running out of some ingredients which is also limiting me. I don't like using lard because of the vegetarians in my family.

I am entering my second attempt. I was trying to capture the colors in an abalone shell. I used Abalone and Sea as the fragrance. 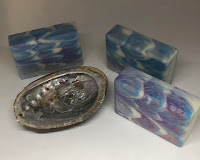 Here is a selection of some of the soaps I made this month while trying to learn this technique. I actually like them but they aren't good examples of the clamshell technique. They are just pretty soaps.

This one was an attempt at the advanced category. 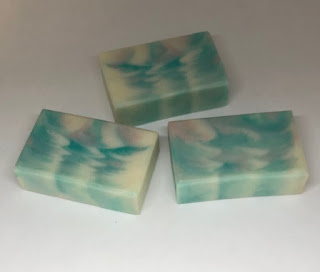 Here is a bunch of them put together: 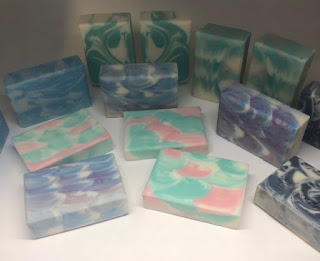 All of my pictures are a bit dark. It has been on and off rainy and overcast and I really have a hard time with lighting. I use my phone for pictures and it isn't the best at getting the colors correct either.

Maybe I will try this again and have better luck next time.